Why Do We Have Dog Breed Standards?

By Becky Casale | Download her Complete Guide to Shelties

Charlotte Hulett of Sunridge Shelties in Missouri considers the breed Standard after breeding Shelties professionally for 50 years, with comparisons of US and English Champions.

I have recently had long discussions with a couple of other long time Sheltie breeders regarding what is required to "breed to The Standard". It is interesting that even among long time breeders, opinions can differ on what exactly constitutes a breeding that is made in accordance with The Breed Standard.

Ever since I learned that there was something called The Breed Standard, I have endeavored to use it as my guide. My original reason for doing that was quite simple; like many others, I was raised with the admonition: "If you're going to do it, do it right".

Many years ago I obtained a copy of a book titled; The Illustrated Standard of The Shetland Sheepdog by Jean Daniels Simmonds. So, for many years, that Illustrated Standard has been my guide as to what was called for in our breed Standard. It has greatly helped me picture, in my minds eye, just what our Standard is calling for.

So, why should anyone/everyone endeavor to breed to that Standard?

First, we need to realize that at the time the current Standard was written in 1952, there was still a need to stabilize breed type. I recall that even in the early 1960's when I first started going to dog shows, there was much more variation in the general "look" of the dogs than we see in the ring today.

Looking back even farther; photos of "Shelties" in the show ring in England in the early 1900's showed a "motley crew" indeed! I can just imagine a judge at a show looking at such a group and wondering how in the world to sort them out and decide which was the "correct" dog of its breed. So, if for no other reason, I can see why there was a necessity to give the poor bewildered judges a written guide to help them evaluate the dogs presented to them.  (Looking at those photos now, none of those dogs really look like what we consider "correct type" today.)

How did we get from that point to where we are today? Because of the dedication of the early breeders in England/Great Britain and in this country and their efforts to standardize type by "putting it in writing".

In regards the current U.S. Standard: It has always seemed to me that the document which was written in 1952, was written by very knowledgeable people. (It is my understanding, that some of those who had the most in-put at that time, were long time horse breeders/exhibitors who were used to evaluating how form influences function.)

Sometime after I first started studying our breed Standard, I also read other books on dog structure and movement, including McDowell Lyons The Dog in Action and Rachel Page Elliott's Dog Steps. Our Standard seemed to me to co-ordinate well with those books in calling for a sound structured, sound moving dog. Even today, I don't hear a lot of disagreement on how our dogs should be structured and how they should move. (Mostly the disagreements on structure that I hear discussed are that some of the dogs are too heavy boned and "cloddy" and therefore not "agile" as called for in the standard.) There are still a lot of areas where too many of our dogs are lacking in proper structure and movement, but I don't hear people disagreeing on what those areas are. I think most believe that we have, for instance, too many straight shoulders and it is something that we all need to work on.

It seems that the area that has the most disagreements is: "Type". Not just head type, but body type as well. (IE: Agile vs. Sturdy) Who exactly should get to be the final arbiter of what correct head/body type is? Some say the English/British, as most our dogs were originally imported from England/Great Britain. Some feel that we have diverged too far from those early imports. But the English dogs have also changed a lot from the look of not too many years ago.  I recall an English Champion who was imported into our area of the U.S. in the mid 1960's. He finished very quickly. He was a beautiful dog, who was not extremely different from the American dogs of the time. A bit more stylish and refined than some in our area, but he was not "foreign" looking. I think most of  the current English Champions would likely have a hard time finishing in the U.S. today, for they would indeed have a "foreign look" when presented in the ring with the current American dogs. And vice-versa; our dogs would (do) look foreign in the English show ring.

So, again, who should get to decide what "correct type" is? I like the answer Nioma Coen gave at a conference in England a few years ago. Her statement at that time was: "You like your dogs, we like ours".  That seems so simple and common sense to me!

Again, the English dogs have diverged in type from what they were not too many years ago. So have ours. Considering that, I think we should all adopt that common sense philosophy: "You like your dogs, we like ours" and should just wish each other well and let it go at that. It is fairly obvious that breeders in neither country wants to "re-tool" and adopt the others preferences.

It seems very sad to me that so many people now seem to be obsessed with "dictating" what others should be doing, whether it is in regard to type or to venue preferences. For instance: I have heard a great deal of complaining lately from conformation breeders that "the performance people are going to ruin the breed". When I inquired as to how they were "going to ruin the breed". The answers most often given were; (1.) "By breeding for those little 13 inch dogs, so they can carry them around in Sherpa bags." How worried should we all be about that? Well, first of all, breeding 13 inch dogs is NOT breeding outside the standard! (Doesn't our Standard state: Size: 13-16 inches?!)

To those who think that 13 inch dogs can't be typey I will just say that I have seen a number of typey little ones in my 50 years in the breed! One of my all-time favorites is Ch. Starhaven's Rainbow Brite, who was probably about 13 1/2 inches. And the dog I would have most liked to have taken home from our recent speciality show was a very sound, stylish, elegant, typey 13 3/8 inch bitch. She won the sweepstakes. Her name was Blue Heaven's Chicadee and she was gorgeous!!!  (She later finished her Championship.) Are all 13 inch dogs typey? Of course not, but not all 14, 15, or 16 inch dogs are either.

If some want to breed for 13 inch dogs, shouldn't that be their personal choice? And if they want to carry them in Sherpa bags; so what? How does that adversely affect the rest of us? Look around you the next time you go to a dog show, people carry their dogs in all sorts of carriers! Do you want someone to dictate to you what you can carry your dogs in?

The other reason stated to me regarding how "the performance people are going to ruin the breed" was; (2.) "By breeding for those hyper dogs that will run fast in Agility." I know quite a few people who show in Agility and please believe me, they are not breeding for and DO NOT WANT,  "hyper" dogs!!! A hyper dog is un-reliable and frequently un-controllable. Agility is all about reliability and control! What the Agility trainers/handlers want is a dog that is; smart, sound, sturdy, agile and responsive. In other words, the dog that is called for in the Standard! (No, they don't want the overly heavy boned, soft bodied, "couch potatoes", which are NOT what is called for in the Standard!)

Back to the main subject: Breeding to the standard. Is there ever an acceptable reason for breeding outside the Standard? The one area where I have seen some knowledgeable, conscientious breeders do so, is in breeding a "sixteen and a fraction inch" dog. It is my understanding that at least two of the non-champion ROM's were 16+ inch dogs. I believe they were used because they had some outstanding, hard to get qualities; such as correct length and carriage of neck, proper layback of shoulder and proper length of upper arm, etc. But along with those qualities, they also often produced their size. So I guess we all have to decide whether such a trade-off is worthwhile in our individual case.

So, ultimately, why should we endeavor to breed to the standard? Following are just a few of the reasons I believe are important.

1. Because, as previously stated: "If you're going to do it, do it right!"

2. Because the dog described in the standard is a sound, intelligent, beautiful, versatile animal and should be able to do well in both Conformation and Performance events, without any deviation from the standard. (Perhaps the conformation exhibitors need to take care that their dogs don't get any "heavier and cloddier" and the Performance exhibitors need to take care to not breed from dogs that are too small or "fine boned".) 3. Because dogs that are correctly constructed should live healthier lives. (For instance, they should be less prone to joint deterioration if the joints are correctly constructed to begin with.)

4. Because people who come to you to buy a dog want to know, with a reasonable amount of certainty, what that dog is going to look like as an adult.

5. Because it is a fascinating challenge! As any long time Sheltie breeder will tell you, it is most definitely not easy to consistently produce dogs that are exactly what you planned. Breeding consistent quality is definitely a challenge. But a very fascinating one!

So, whatever country you live in or whatever venue you show in, why not obtain a copy of The Standard that applies to your breed, in Your Country and study it! These Standards were written by people who understood sound structure and movement and who loved this breed. I believe we owe them a debt of gratitude for helping make our breed what it is today: A sound, intelligent, beautiful, versatile animal! Shouldn't we all, no matter what venue we prefer, strive to continue to breed those qualities which make our breed so special?!

Becky Casale is the author of Sheltie Planet and Science Me. She lives in New Zealand with her partner, their two children, and their Sheltie Piper. 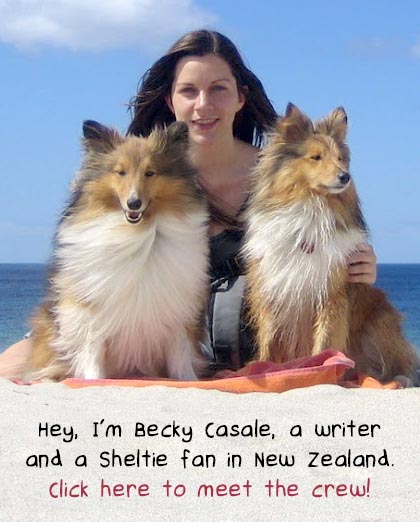